Young people in the UK who have been striking for the climate are calling on adults to join them on Friday 20 September as part of a massive global day of action.

Find your local strike More events are being added all the time.

NEW: details of plans for London on 20th September

There's a guide here for adults wanting to get involved.

What can I do as a trade union member?

Take a motion to your union branch / local Trades Council to support the strikes (template motion). Invite a school striker to your meeting if you can.

Call a union meeting in your workplace to see if people are willing to take action. This might be just a 30 minute stoppage, but in some workplaces much more ambitious action may be possible.

Find out about what's happening in your area. You could get in touch with relevant local groups (trade unions, climate campaigners, activist groups concerned with other social justice issues, and of course, school strikers) and organise a planning meeting like the ones listed below.

Do tell us about actions agreed in workplaces or union branches - email info@campaigncc.org.

Get some flyers to promote the strike (see below). Share the video above.

Over 900 Amazon employees have signed an internal petition pledging to walk out over their employer’s lack of action on climate change, the first time in Amazon’s 25-year history that workers at its Seattle headquarters have walked off the job, though many are taking paid leave to do so. Facebook and Google employees are also planning to join.

In Australia, strike organisers have got over 1,200 businesses, Australian and global, to pledge to enable workers to join the strike, using the hashtag #NotBusinessAsUsual.

Updates from around the UK

1pm will be the national ‘Climate Alarm’ moment - alarms for 1 minute, wherever you are.

There's lots happening across local government where Unison branch officers, reps and members have worked hard to deliver action for the 20th. Rightly, given that many Councils have declared a Climate Emergency, Union members have asked councils to put words into action, starting with support for 20th September.

Here's some examples of the kind of action being planned.

In Salford Unison have negotiated that all workers will be able to join a rally outside the Town Hall, any worker who wants to will then be able to attend the protests in central Manchester, without penalties. The council have agreed that UNISON can run stalls across councils site on the issue of Climate and ecological crisis, union members will wear green, bamboo arm-bands in solidarity with the school strikes, with the slogan "system change not climate change'

In Camden UNISON have an agreed lunchtime rally on 20 Sept outside the main council building. On the day before the strike an all staff briefing will give a slot to Camden UNISON Branch Secretary to join Council officials to talk about the Climate Emergency and the rally and protest on 20th. Camden UNISON is organising a delegation to join students at the central London protest.

In Portsmouth the UNISON branch at the city council has secured council agreement for staff to join a midday rally in the square using 30 minutes of paid leave from work plus reasonable travel time. Portsmouth Council have declared a climate emergency and will be sending an email to all staff encouraging them to attend.

In Doncaster the Council are voting on the 19th on deceasing a Climate Emergency - they will sound sirens to herald the Climate Emergency with council Trade Unions and schools close to the Town Hall joining school student strikers in a Rally.

In Tower Hamlets the Council is supporting the students protest on the 20th and are keen to create opportunities for their staff to show their solidarity. A coalition of Unions, including UNISON, UNITE, UCU, the Students Union at Queen Mary University and XR will be joining the school strikers at a rally and are looking at ways of highlighting air pollution in the borough through action on the day.

In Lambeth the Council are supporting a lunch time rally on Friday 20th September in Windrush Square starting at 12.30 and UNISON are currently in discussion with the Council about supporting workers who want to join the Central London protest later in the day.

In Scotland UNISON have called on members to organise a day of action as part of Green UNISON day on 20th September the day of the global #climatestrike by school students.

As an example of bringing about change in the workplace, at the London School of Economics (LSE), UNISON have persuaded the management to start collecting data on carbon emissions from air travel.

There are many ideas for actions and a great video reminding UNISON members that they love a rebellion here.

In Scotland six walkouts are being prepared in Edinburgh, Glasgow, Dundee and Aberdeen.. UCU and NEU members at Capital City College group in London have voted to join the students' protest in central London on the day.

Some UCU branches, like Croydon and Nottingham, will be organising their next round of strike over pay to coincide with the school students strikes.

At the University of Southampton, UCU, UNISON and the students' union are holding a rally which is being supported by university management.

DEFRA employees in Bristol and London are planning to take collective flexitime to join the climate strike. They have also asked that staff employed on short term contracts to deal with Brexit are made permanent to deal with Climate Emergency. In Liverpool PCS museum staff have successfully pushed for National Museums Liverpool to declare a Climate Emergency (and at Tate Britain). Culture workers from different unions will be uniting to support the day of action.

Workers on outsourced contract at BEIS (the Department for Business, Energy and Industrial Strategy) who are on indefinite strike for a London Living Wage, will be joining the climate strike. Other PCS members and anyone else who wants to show solidarity, are invited to join them join them on the picket line on 20th September  from 11am to march together to the London rally at 12.30 - for a living wage and liveable planet. On Monday morning 7.30-10am there will be climate strike banner and sign-making on the picket lines, 1 Victoria Street SW1H 0ET.

Unite have called on members to take part in the 30 minute work day action. Branches are participating in a range of ways. For example, in London, Citizens Advice members will be joining the main demo at 11am at the Buxton Memorial Fountain in Victoria Gardens just off Millbank. Members at London Gypsies and Travellers  are leaving Mildmay Community Centre at 11am, going to the Islington Town Hall Rally at 12pm and some of them will make their way to central London for the rally and possible march at around 2pm.  Southwark reps have also organised stalls at 11.30am at the Frensham Street depot to raise awareness. Members from St George's Health Branch will meet at Tooting Broadway station at 10am to hear from local school strikers and then travel to Millbank together via the Underground. Our members at War on Want will be joining the Climate Justice is Migrant Justice Bloc

NEU, the teachers' union have suggested a range of ways teachers can take action, including taking a delegation to protests.

School groups are planning a range of action from INSET days on the 20th to look at transformation of the curriculum, with staff joining the protests later in the day. A Curriculum Climate Strike where teachers and students will join together to learn about the Climate and Ecological crisis and show solidarity through an action in school. Some schools and NEU groups are planning delegations to local action as part of a school trip to rally at Town Hall demos organised with with parents groups.

The Bakers, Food and Allied Workers Union passed a motion at their annual conference to support the strikes.

Workers in the creative industries have written an open letter calling on those who work in these industries to join the Climate Strike. 32 CEOs and rising have signed the open letter committing to giving employees the opportunity to take time to 1) Join the strike on September 20th and 2) Create something that amplifies the climate emergency message at the strikes.

The Writers Guild are supporting the strike.

Several architects firms have committed to joining the climate strike.

Organisers of the Carlisle rally report that Cumbrian businesses and organisations are supporting the strikes in large numbers, as well as support from local trade unions. Ellergreen Hydro, Cumbria Action for Sustainability, RSPB and 2030 Architects are among those giving staff time off to support and speak at the strikes. Speakers will also include Graham Frost, Headteacher at Robert Ferguson School who will be bringing a delegation of pupils.

So far there are reports that CWU members, postal workers in Oxford will show solidarity on the day. UNITE members from Oxfam and UNISON Health members from local hospitals will be joining the student strikers at midday in the centre of Oxford. Delegations are also expected from council workers and from Oxford University Press. 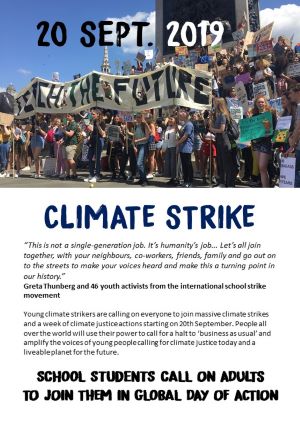 Email info@campaigncc.org to request flyers with ideas of how people can take part, and stickers (above).

A3 poster - print off or request copies as above.