Why workers should oppose aviation expansion 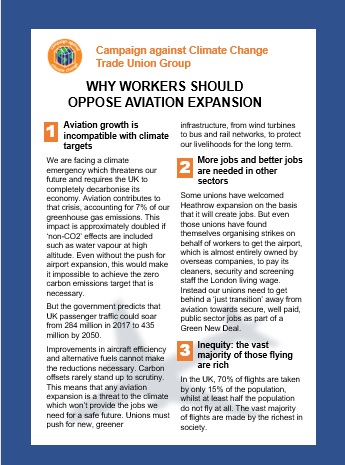 News:  27th February 2020 - momentous news! Judges ruled the government's decision to permit the expansion of the UK's busiest airport was illegal because ministers did not take into account the impact on the country's commitment to tackle global warming.  The airport may challenge the decision, but the government seems likely to accept the ruling.

Bristol Airport expansion has been rejected after climate protests, which is a huge success! This great mobilising achievement comes after the Stansted airport  expansion plans were rejected in January by members of the council's special planning committee. The scheme was rejected by 10 votes which means a significant concern towards climate change action.

We are facing a climate emergency that requires the UK to completely decarbonise its economy. Aviation already accounts for 7% of our greenhouse gas emissions, (1) which could be doubled by including the additional impact of high-altitude ‘non-CO2’ emissions. (2) Even without expansion, this would be difficult to absorb within a ‘net-zero’ emissions target for the UK.

There’s no alternative to managing demand: improvements in aircraft efficiency and alternative fuels can only make a small dent, (4) while carbon offsets rarely stand up to scrutiny. (5) This means there is no way that aviation expansion will provide the jobs of the future. Unions must push for new, greener infrastructure, from wind turbines to bus and rail networks to protect our livelihoods for the long term.

More jobs and better jobs are needed in other sectors

Some unions have welcomed Heathrow expansion on the basis that it will create jobs. But even those unions have found themselves organising strikes on behalf of workers to get the airport, which is almost entirely owned by overseas companies, (6) to pay its cleaners, security and screening staff the London living wage. (7) Instead our unions need to get behind a ‘just transition’ away from aviation towards secure, well paid, public sector jobs as part of a Green New Deal.

Inequity: the vast majority of those flying are rich

The sector enjoys significant tax breaks. It has been estimated that the tax exemption on aviation fuel costs the Exchequer £4 billion a year that could go towards struggling public services. (10)

In addition to global climate impacts meted out on the poorest, airport expansion is detrimental to the health of those living nearby. The area around Heathrow already breaches legal limits for air pollution. Local councils warn that expansion of Heathrow will damage the health of around 121,000 people. (11) Aircraft noise disrupts residents’ daily living, sleep and children's learning. (12) Air pollution exacerbates respiratory and cardiovascular conditions and leads to premature deaths. (13)

Demand for high-carbon flights needs to be managed, not encouraged, through means such as investment in affordable, nationalised rail; a frequent flyer levy; and incentives for businesses to adopt no-fly solutions such as video-conferences. Limited annual leave allowance should also be addressed as a possible barrier to holiday travel by trains.

What you can do

The alternative to low pay and climate change is not bigger airports, but government investment in climate jobs, as set out in the One Million Climate Jobs report, produced by the Campaign against Climate Change trade union group. We encourage all workers to join an appropriate trade union www.tuc.org.uk/join-union. If you are in a union, take our model motion to your union branch and local trades council. Join the Campaign against Climate Change.

The text above is from a flyer produced by the Campaign against Climate Change Trade Union Group (full references below). To request (free) copies of the flyer, contact info@campaigncc.org.

Airports are planning expansion across the country - support your local campaign.

2. While the UK Committee on Climate Change dismisses the non-CO2 effects of aviation as "short-lived and not currently covered by the international reporting" there is a general consensus that these impacts are significant. While it is easy to calculate CO2 emitted from fuel burnt, other effects such as contrails are more complex:  https://www.carbonbrief.org/explainer-challenge-tackling-aviations-non-co2-emissionsUnlike CO2 which lasts for hundreds of years, these persist only because they are renewed hourly by constant flights. Methods to compare them to CO2 vary in their results. This paper suggests doubling CO2 emissions (using a factor of 2) is the most reliable https://www.researchgate.net/publication/329051755_Recommendations_for_calculation_of_the_global_warming_potential_of_aviation_including_the_radiative_forcing_index This one shows a range of results from 1.3-2.9 as multiplication factors: https://link.springer.com/article/10.1007/s10584-011-0168-8

https://www.transportenvironment.org/news/85-offsets-failed-reduce-emissions-says-eu-study (Report found that 85% of the offset projects used by the EU under the UN’s Clean Development Mechanism failed to reduce emissions).

10. Transport & Environment, which has analysed the tax regime at an EU level, calculated for us that that the revenue from fuel duty of 0.33€ / litre from all UK departing flights would be €4.8 billion. This is based on aviation in 2016, so could be greater if applied today (although the tax might have an impact on demand). The current campaign to apply a kerosene tax within the EU is only for domestic and intra-EU flights because of legal restrictions on a tax on other international flights.