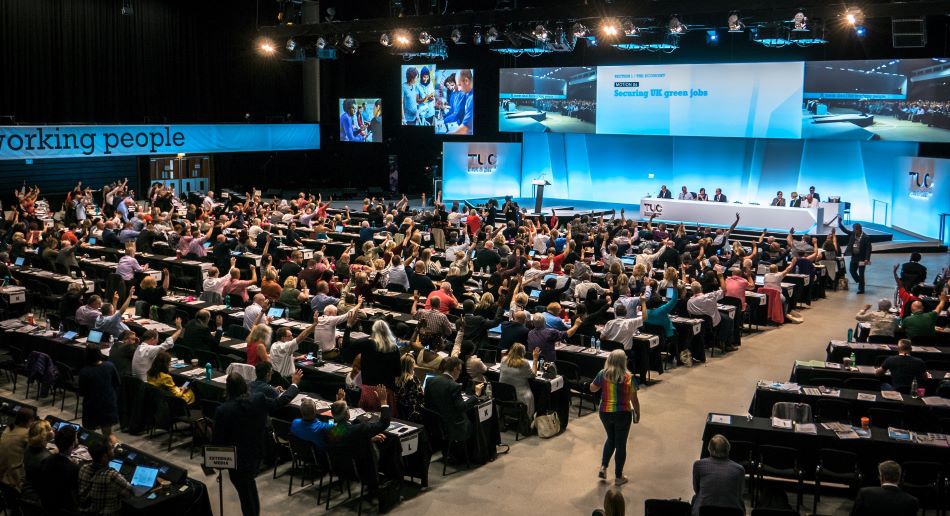 The TUC passed, unanimously, the composite motion calling for a 30-minute workday campaign action to coincide with the global school student strike on the 20th September. It is the first time that the TUC has called on its 6.5 million members to demonstrate support for school students taking action. Indeed, it is the first time in many years the TUC has called on its members to demonstrate its collective power in solidarity with anyone.

The trade union movement has a great debt to pay to the school students for transforming the debate over climate change and making it one of the main priorities amongst working people.

The 20th September will be the biggest organised labour response in the UK to climate change. UCU members at 8 universities in Scotland are organising to walk out on the day. At Bristol University the Vice-Chancellor has declared a climate emergency and is encouraging staff to show their support for the students. At Capital City College Group UCU branches have voted to join the students on the day and the CEO has agreed to allow staff and students to attend. Councils in Salford, Camden and Tower Hamlets are supporting its workers showing their decision to support the students (video) and colleges and universities around the UK are already organising in support of this call.

As Jeremy Corbyn reminded Congress in his speech today, ‘Climate Change is a class issue’. It is the poor and dispossessed that feel the full blast of extreme weather conditions brought about by climate change.   From the fires in the Amazon to the terrifying hurricane ripping up the Bahamas to conditions that workers endure in the global South to produce cheap goods for the rest of the world. It is they who are being made to pay for the greed of the multinational companies who continued to ignore the science that proves that climate change is occurring because of their relentless drive for profit.

It is a shame that the TUC ensured that the composite had taken out the word ‘stoppage’ from UCU’s original motion. UCU feel that it would be a stronger motion and would have made it clear to workers what it is the TUC is asking them to do on the day. Whilst the trade union laws make such calls ‘illegal’ where there are unjust laws it must be the duty of the trade union movement to challenge these laws.

The vote today has sent a clear message to young people that the TUC is with them and that trade unions are organisations that they need to join to make them relevant to future generations. When young people do so then they must feel that the TUC is open and democratic, which means allowing debate on motions even when there are differences of opinions.

The Bakers union (BFAWU) also passed a very important motion which called the TUC to campaign for the whole of the power sector to be brought under public ownership. This is a central demand that we must be raising across the working-class movement.

It is important that governments declare climate emergencies but without the legislation that puts the energy sector under public ownership as we see in Scotland, private firms will control our energy supplies and renewable industries and they will put profit before the needs of our communities.

Today the TUC took an important step forward on the issue of climate change that matches our young peoples’ outrage and anger. Let’s make sure that September 20th 2019 is a massive show of our collective power and solidarity to make it clear that we will not allow Johnson and his fossil fuel friends to destroy our planet.