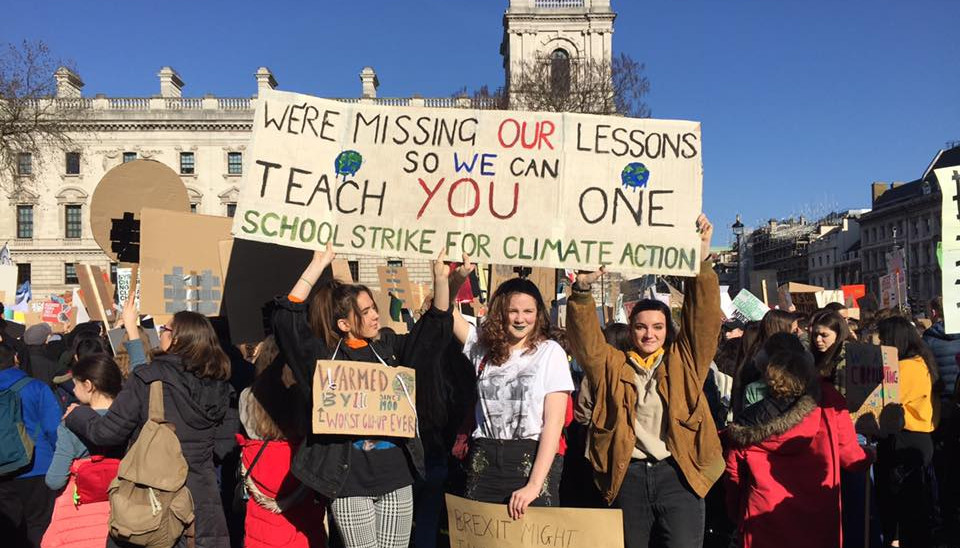 The NEU teaching union has voted to stand in "full solidarity" with those who have been taking part in global protests, and called for a Just Transition.
Full text of motion with amendments included below.
Conference recognises that the latest UN climate report shows that:
1. Without more rapid action, there will be at least a 3 degrees temperature rise by 2100;
2. 1 degree rise above pre-industrial levels has already led to increasing fires, hurricanes, floods and droughts;
3. The transition to a zero-carbon society to keep below a 1.5 degree increase is the most urgent problem facing humanity and is technically feasible; and
4. The obstacles are entirely political.
Conference believes that:
i. The consequences of a failure to act – or an unjust transition, whereby those with wealth and power dump the costs downwards – will be severe for our members, our communities, the children we teach and - in the worst case – could threaten our survival;
ii. We have to help lead a Just Transition; shifting energy production, transport, housing and agriculture onto a sustainable basis within the lifetimes of the children currently in our schools; with workers and communities most directly affected not dumped into destitution like the miners, but re-skilled to carry the transition out;
iii. This needs immediate Government investment for a qualitative shift within 12 years, including a significant shift in the focus and aims of Education, as required by Article 12 of the Paris Agreement;
iv. The current Government's market solutions are failing, leading to the UK missing its targets; and
v. The Labour Green Transformation Plan grasps the scale and speed of the transition required but this must be integrated into every level of the proposed National Education Service (NES).
vi. That the inadequacy of government action in the face of the urgency of the crisis has led to a rapidly growing global school students movement rightly taking the lead in demanding that their politicians urgently take the action needed to tackle the climate crisis and that our education system reflects this priority.
vii. As a generation without a voice in elections, but one which the climate crisis will impact the greatest, we commend their willingness to engage in political debate to ensure their voice is heard.
viii. The biggest polluters are top corporations which are also responsible for attacking the wages and conditions of workers. Tackling climate change and improving the conditions of our members means struggling against big business, its owners and its political representatives; and;
ix. School and college students, those with the most to lose from global warming, have walked out of class in their thousands to protest against it, with more actions planned.
Conference instructs the Executive to approach NUS, UCU, other education unions and interested parties including the school students movement to:
a. Lobby Government to press them on plans to carry out their obligation under the Paris Agreement to educate the public about the scale of climate change and the measures needed to deal with it – including through school's curricula – and a recognition that for every school to be zero carbon by 2030;
b. Make Just Transition a key narrative in our discussions about the NES; and
c. Hold an Education for a Just Transition conference in the Autumn.
d. Welcome the statement by Education International stating that "education unions stand with the students", to disseminate this statement widely and propose that EI promotes an international campaign to implement Article 12.
e. To stand in full solidarity with all students striking or protesting against climate change;
f. To oppose any reprisals against students taking action to fight climate change, such as detentions, exclusions. The rights to strike and protest are fundamental democratic rights for students and workers alike. We pledge to support student defence campaigns as necessary;
g. We pledge to support future student actions by approaching student representatvies to offer trade union speakers, stewards and organisational support; and
h. We will campaign for these important global issues to be integrated into a broad-based curriculum, as part of a fully funded and staffed education systme to suit all neeeds.
Conference agrees that the National Education Union affiliates to the Campaign against Climate Change.