Protest has shaped the debate but Paris didn't save the planet

Submitted by Suzanne on Sun, 2015-12-13 20:56
The climate deal agreed by world leaders in Paris this week is being heralded as a historic deal which has set the world on track to avoid catastrophic climate change.

This is by no means what has happened.
What is true is that world leaders have been under pressure from a growing global climate movement and community of scientists who have successfully raised awareness of both the issue and the need for serious and urgent action.
To some extent whatever positives there are in the agreement are a reflection of this pressure. The headline grabbing desire "to pursue efforts to limit temperature rises to below 1.5 degrees" reflects the campaigning of many in the poorest parts of the world that have rightly argued that 2 degrees warming seals their fate. For many years their campaigning slogan has been 1.5 to stay alive!
It's important that we recognise the impact of protest and pressure on the talks. However there will be and should be no complacency from the movement in the wake of the Paris agreement.
The deal is historic only in so far as it underlines what the movement has been arguing for years. That there is an urgent and real threat to the climate which will have catastrophic consequences.
But that threat still remains because the Paris talks have done absolutely nothing to prevent it or begin to tackle it.
The commitments made by countries to reduce emissions, far from keeping temperatures below 1.5 degrees instead set us on track for 3 degrees warming. It is not only the most vulnerable for which this means a death sentence. These commitments to reduce emissions are not even legally binding. There is nothing to enforce national government compliance with their own commitments.
Despite the rhetoric there is no urgency in the agreement. A review of progress will take place in 2018, again with no legal status and a "stock take process" is set to begin from 2023. The real action that could tackle climate change - massive cuts to fossil fuels are postponed by timelines which bear no relation to the pace of change that the climate is already undergoing or to the need for urgent action to prevent further warming.
Given that many scientists predict we will have hit 1. 2 degrees warming by 2030 the detail and non urgent timescale of the deal continue to set us firmly on track for catastrophic climate change.
The climate scientist and activist James Hanson, has called the agreement a "fraud", "fake" and "bullshit" - no action, just promises.
The headlines might want us to believe the days of fossil fuels are over. But for the CEOs and bosses of the worlds richest coal, oil, gas and fracking companies, the world looks pretty much like business as usual coming out of the Paris talks as it was going into it. Profit making polluting with impunity is not threatened by the deal. Indeed the new carbon markets introduced into the Paris agreement will no doubt make some of the very rich, even richer with no impact on reducing emissions.
This is most definitely the case in the UK where Cameron and Osborne's policies are creating a new golden era of super profits for their friends in the fossil fuel companies at the same time as trashing renewable energy and the environmental policies aimed at cutting emissions. 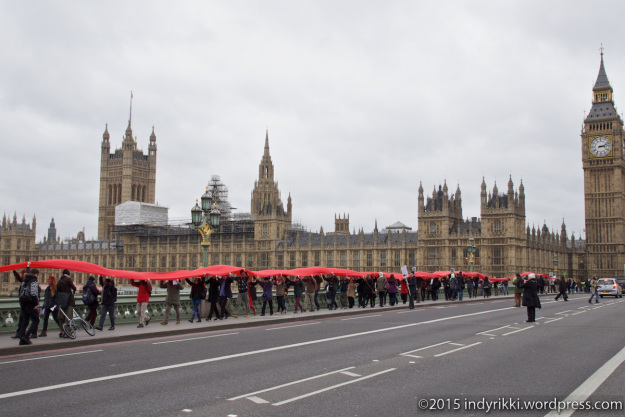 Campaign against Climate Change Red Lines protest on 12/12 highlighting UK government climate backtracking. Picture by IndyRikki - read his full report on this and another solidarity action here.
Paris has not saved the planet. Nothing could be further from the truth. Now is the time to redouble our efforts to build a bigger more diverse climate movement. One willing to make common cause with others who are challenging a government and a system that still prioritises the interests of the wealthy over the interests of the planet and the people who live on it.
Our first challenge is to expose and take on the devastating impact Tory policies are having on the environment in the UK.
Amber Rudd said before Paris that government energy policy was going to give less focus to climate change and more emphasis on 'affordable energy'!! We need to make sure that the Tory government can't get away with spinning the lie that climate change will not devastate ordinary people's lives or that fossil fuels help keep bills down. The floods in Cumbria show us yet again what climate change really means. And we also need to make sure that we redouble our efforts to fight for massive popular support for policies like one million climate jobs which do tackle climate change and create jobs.
We need to make sure we stay on the streets in 2016.
Suzanne Jeffrey is the chair of the Campaign against Climate Change