Together against Trump: Climate bloc 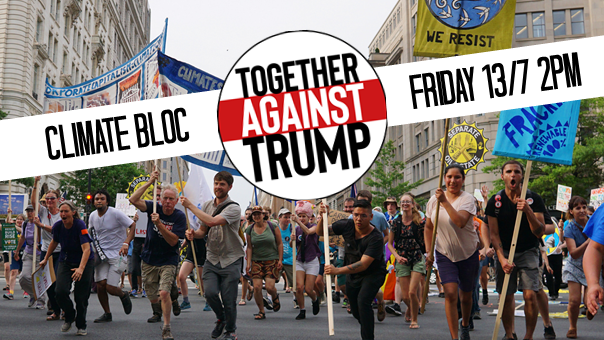 Just over a year after announcing US withdrawal from the Paris climate deal, Donald Trump will visit the UK for the first time, 12-14 July.

Join us on the climate bloc on the national demonstration  against Trump and all he stands for. To make it clear that Trump's attempts to wreck not just US but global climate action are a crime against all of us. And to stand with the poorest in the front line of climate change, with indigenous communities defending their land and water from fossil fuels, and with scientists whose vital research is under attack.

Join us to stand ‘Together against Trump’

Rally in Trafalgar Square at 5pm

There will be also be a rally on Thursday 12th from 5pm. Because of the protests planned, Trump may only stay in London on Thursday night, then leave, for example to Chequers. If so, protesters will meet him there, but the mass demonstration in London will still go ahead as a sign of national resistance.

You can also call on your MP to sign a statement against the visit.