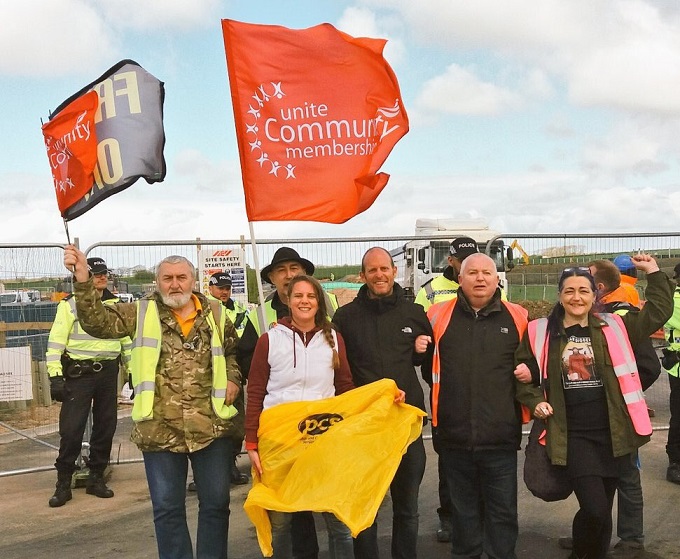 We stand in solidarity with antifracking campaigners in the community and will be going to Preston New Road in support of the people of the Fylde, the Nanas and all the other amazing people who are resisting every day at the site. Bring your banner, get your union, your branch, your trades council to send representatives and message of solidarity.

Template motion in support of the event

That exploitation of unconventional fossil fuels (including fracking) on any significant scale is not compatible with the UK's commitments under the Climate Change Act and the Paris climate deal;

The impacts which fracking can have on health and the environment as demonstrated in hundreds of peer reviewed studies;

The threat to local democracy when fracking is imposed by central government against the will of communities, as it was in Lancashire, where the county council had rejected the fracking application;

The tireless work of local communities and activists in resistance to the Preston New Road site in Lancashire, including peaceful direct action;

The solidarity day 'Trades unions vs fracking' organised on 9th June as part of a three month programme of events at Preston New Road, the 'United Resistance'.

That a sustainable future and economic revival of all regions of the UK depends on investment in climate jobs, not fracking.

To send a delegation on 9th June with the organisation's banner;
If appropriate to subsidise local transport / organise a coach to the protest;
To make a donation towards the costs of hosting the event, via the Campaign against Climate Change Trade Union group.

Flyers 'Why workers should oppose fracking' available from Campaign against Climate Change https://www.cacctu.org.uk/resources

Information on the health and environmental impacts of fracking: https://www.frackfreeunited.co.uk/fracking-what-you-need-to-know/environ...