Temperature records continue to be shattered...

January 2016 was the hottest month ever recorded. Until February 2016, which marked the 10th month in a row of record breaking global warmth).

Starting to see a pattern here? 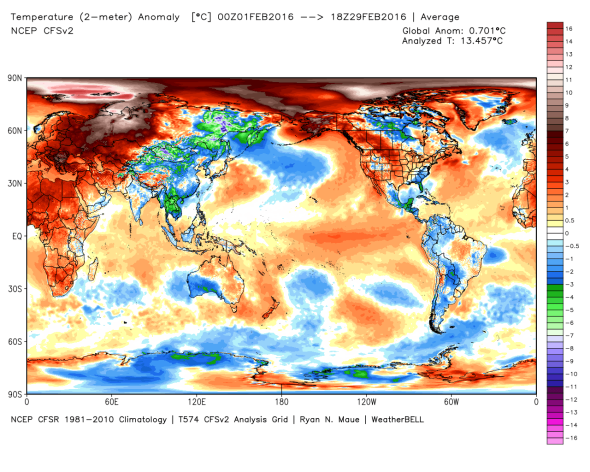 Climate records around the world are being smashed. According to Eric Holthaus in Slate magazine it took from the pre-industrial period to October 2015 to reach \+1.0 celsius above pre-industrial levels but only the last 4 months to increase by a further 0.4c.

The Arctic had a freakishly warm December with temperatures at one stage approaching 0c which is 30-35c above where it would be normally. In January, temperatures in part of the Arctic averaged 12c above the average while sea ice extent was 402,000 square miles below average.

According to this article summer near-surface temperatures in Greenland have been increasing by 0.74c per decade, causing ice to melt. The article goes on to say that more than half of Greenland's ice sheet experienced some melting last summer, the highest amount since 2012. As the ice melt so the rate of warming increases.

Australia is experiencing its sixth hottest summer on record with Tasmania surpassing its hottest ever summer by 0.5c. Sydney has endured 26 days of temperatures of at least 26c, beating the previous record by one week.

Closer to home provisional figures from the Met Office show that England and Wales have had their warmest winters since records began in 1910 and that the UK as a whole experienced its second wettest winter ever.

Obviously, we have recently been in the grip of El Nino which is contributing to these record breaking changes but, as this article explains, the key underlying factor is climate change.

At the COP21 climate change talks in Paris in December, all governments agreed to a commitment to keep global temperatures at +2c compared with pre-industrial levels with a stretch goal of +1.5c. From what we're seeing at the moment unless deep cuts to emissions start to happen immediately temperatures will rise ways beyond these targets.

The UK Government talked a good game at the COP21 talks. Indeed in his speech at the Conference Prime Minster David Cameron said that '..instead of making excuses tomorrow to our children and grandchildren, we should be taking action against climate change today.'

However, this rhetoric stands in stark contrast with many of the decisions the Government has taken since re-election in May 2015. From abolishing subsidies for onshore windfarms and reducing them for solar PV and thermal to abolishing plans for Zero Carbon Homes the UK Governemnt is #goingbackwards with its climate change policy.

Which is why on Sunday 8th May we want you to help us highlight the many ways in which the UK Government is #goingbackwards. We will holding a protest in Whitehall: walking *backwards* past the offices of the Department of Energy and Climate Change, passing 10 Downing Street and ending up outside the Treasury. Fun and thought-provoking stunts along the way.

If you're not in London we would love you to still get involved by organising an event where you live.