This is getting tedious. It's snowing AGAIN and it's now April... Like almost everyone else, we're getting fed up with the freezing weather. But what lies behind it? Just the well-known unpredictability of UK weather or something more worrying? It seems counter-intuitive to attribute unseasonally cold weather to 'global warming'. In fact, both last year's record March warmth and this years snowfall seem to be linked to a warmer Arctic affecting the jetstream and causing erratic weather patterns.

Some scientists had already predicted in September that after the record loss of Arctic sea ice this summer we could expect a cold winter in the UK and northern Europe. While summer sea ice loss is more dramatic, winter sea ice is also shrinking, and also affects weather in the northern hemisphere. The key to understanding this is the jet stream.

What is a jet stream?

Jet streams are fast flowing, narrow air currents found at the boundaries of adjacent air masses with significant differences in temperature. The northern hemisphere polar jet flows in a meandering path over the middle to northern latitudes of North America, Europe, and Asia, west to east and around 7-12 km above sea level. The meandering path of the jet stream is significant because it pushes other weather systems around, shifting rainfall away from one area perhaps, or allowing cold air towards another.

The Arctic is warming over twice as fast as temperate latitudes because of feedback: for example, as sea ice retreats, sunshine that would have been reflected back to space by the bright ice is absorbed by darker open water, which heats up, melting even more ice.  This is easily seen in the shrinking summer sea ice. Last year this covered just half the area of the average minimum extent from 1979-2000.

As a result, the north-south temperature difference weakens, which has two impacts on the path of the jet stream. Firstly its path becomes more meandering, with big swings that allow cold air from the Arctic much further south or warm air to reach north. Secondly, these meanders or loops tend to stay in the same place for longer so unusual weather lasts for longer periods.

During the summer of 2010 in Russia, instead of the normal moderate conditions, the jet stream sat further north than usual, keeping the usual rainstorms away. The land got hotter and drier, reinforced by hot air flowing northwards from central Asia and the Arabian peninsula. Hundred wildfires broke out and Moscow, with extreme temperatures and stifling smog recorded nearly 11,000 additional deaths. Over a quarter of Russia's grain harvest was destroyed and in total an estimated 55,000 people died. Could this have happened in the absence of climate change? Yes - however such a heatwave is now three times as likely.

Closer to home, in December 2010 the jet stream looped south over the UK and Western Europe bringing early snows and cold Arctic air, and north over Greenland at the same time, making it much warmer than usual there (as shown in the map below). A similar loop seems to be the cause of this year's freezing spring. This time last year a swing in the other direction brought balmy weather, but also drought. 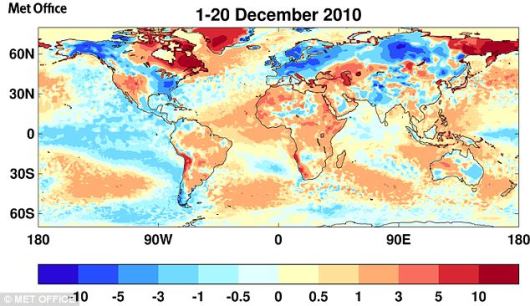 What we have to remember is that climate change is only just getting started. One of the main predictions (alongside higher temperatures, rising sea levels, acidic oceans...) is that extreme weather events become much more likely. These put pressure even on rich countries - in poorer ones they are even more likely to have catastrophic consequences. Our greenhouse gas emissions now mean even more extreme weather and 'natural' de in the future. Conversely, anything we do to cut emissions now will save lives by reducing the probability of these events in decades to come. It's time to act.

The starting point for this post was Phil Thornhill's article from 2012 "Funny weather we're having..." which has lots of links for further reading - in particular a summary from one of the lead scientists on this topic.