This election could decide which political power in the UK until May 2024. These five crucial years for our climate will determine whether the UK acts to avoid climate breakdown or whether we throw away this chance on half-measures and business as usual. Our only chance to avoid climate catastrophe is a radical programme of investment in the infrastructure and jobs we need to create a greener, fairer society and cut emissions rapidly.

Because of this, it is very clear that a win for Boris Johnson and the current Conservative Party would be a loss for the climate, and for all our futures. Read more about why we believe this. Links to more detailed analyses of the parties' manifestos below:

Friends of the Earth

Young people speak out in this video from Channel 4 News ahead of the Climate Debate:

Many members of the Campaign against Climate Change trade union group will be personally involved in campaigning in their constituencies. There also important opportunities to work with many non party-political campaign groups and organisations in your area to raise awareness of what's at stake. Let's make this a 'climate election'.

Get the message out to 'Vote Climate'

There's a nationwide Green New Deal day of action on Saturday 7 December - sign up for for the London event here. 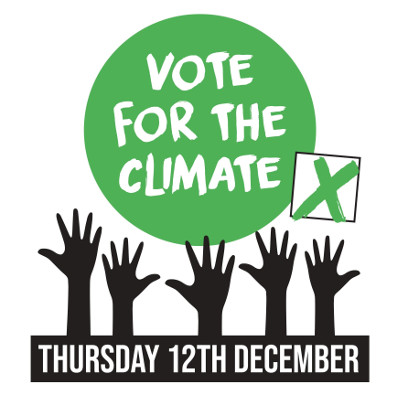 More resources to be added soon.

A hustings is a panel discussion in the run-up to an election where candidates debate policies and answer questions from the audience. Hustings should be 'politically impartial'. As a minimum, you should invite all candidates in your constituencies whose parties hold seats in Westminster. Check out the Friends of the Earth guide to organising a climate hustings, Hope for the Future also have hustings resources.

What is your your party's target date for reaching net zero emissions for the UK and why was it chosen?

Will you be aiming to get the UK to 100% renewable energy, and if so by when?

The UK is currently off course to meet its target of 80% emissions cuts by 2050. What do you think the most important policy changes are to achieve net zero by the chosen target date?

Airports around the country are planning expansion - if all these plans go ahead passenger numbers will rise by two thirds. What national policies will you bring in to curb this expansion and reduce emissions from this sector rather than allowing them to increase? (1)

In government, would your party commit to a permanent ban on all forms of unconventional oil and gas extraction, including fracking?

How would your party’s policies help get people out of their cars in urban areas and promote public transport, cycling and walking to tackle air pollution and cut carbon emissions?

Will your party help remove barriers to communities generating their own renewable energy, including onshore wind energy?

Tackling climate change means making big changes in our society. How will you ensure that ordinary people have a voice in this change?

How will you ensure that communities currently reliant on high carbon industries for jobs are not left behind in the transition to a low carbon economy, and that decent, unionised, climate jobs are available across the country.

The government’s climate advisors have said 1.5 billion new trees are needed to enable the UK to reach its ‘net zero’ climate target. How will you ensure our countryside - agricultural land, forests and other habitats - is managed to take up carbon and restore our lost biodiversity?

Will your party continue the current high levels of subsidies for industrial biomass burning, or transfer these subsidies to renewable energy? (2)

Many of the poorest people around the world are already suffering harm from climate impacts, being forced from their homes by climate-related disasters or having to migrate because of longer term crises like drought. How will your party's policies promote climate justice?

1) While government policy is to rely on the international aviation offsetting scheme, CORSIA, there are big question marks over its ability to deliver real emissions reductions rather than double counting (read more on CORSIA here)

2)  Biomass is often classed as ‘renewable energy’ but it takes decades for new trees to regrow. Diverse forests may also be cut and replaced with monoculture plantations - worse for carbon and biodiversity. Drax power station burns more than the UK’s annual wood production. Further info